...may not be so unique after all. 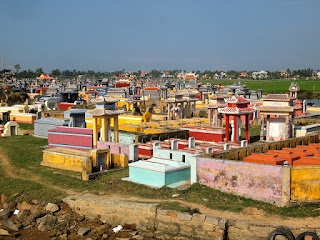 Suffice it to say that a visit to a New Orleans Cemetery is to visit cemeteries of Latin cultures around the world.  Often the world forgets that, unlike the rest of the United States and its protestant British heritage, New Orleans descends from a Catholic colony and just as elaborate above-ground tombs began to spring up in Catholic cultures around the world, so did they spring up here.  Unique?  No.  The cemeteries of New Orleans stand proudly with their Latin counterparts the world over.
Posted by Tour Creole at 4:44 AM